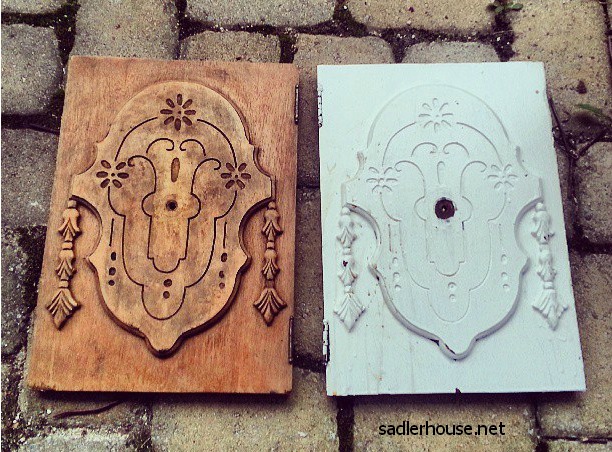 Before we even had closed on the house, we had a moment of reckoning at a garage sale around the corner from our home in Virginia.

These people down the street were moving away, and they were desperate to pare down their stuff. There were some rugs, DVDs, clothes, and other items that didn’t matter to me. Behind it all, though, was the buffet. 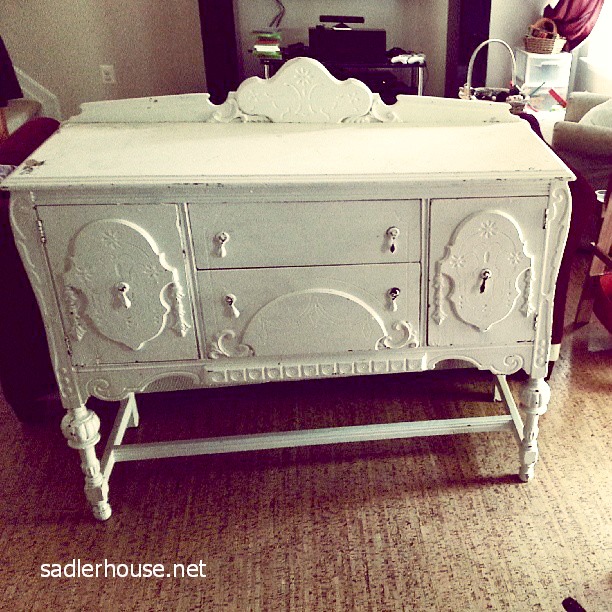 This photo doesn’t even show the ham-handedness of the paint job.

I saw it and I was immediately drawn to it. Even as my heart beat faster and I imagined running home to get my husband, I thought “You are a nut job. Where are you going to put this?” Well, DUH. In the house in Maine.

The house we didn’t yet actually own.

Nonetheless, I dragged Dan and the kids back and made him check it out. We had to politely displace some people who were sorting cd’s on top of it. When he opened and closed it, though, I knew he was hooked, too. We negotiated the woman down to $125 with a little end table thrown in. She said the buffet had belonged to her grandmother, and her sister had committed the sin of slathering it ineptly with a thick layer of white latex paint. She had always wanted to “do something” with it, but no longer had the strength.

We paid her the $125 and our neighbor helped us wheel it to the house on a skateboard.

At first we just thought we’d sand and paint it. We had no idea what shape it was in underneath the paint. Then my dad said he thought we should try stripping it and we thought, why not? We could always sand and paint it if we uncovered too much of a mess. We were novice strippers (heh heh) so Dan went to the home improvement store and got some stripping chemicals, steel wool, and rubber gloves.

Did I mention we were in the  middle of a hundred degree heatwave? This ain’t Maine.

So we blithely pulled the cars out and dragged this buffet into the garage and started working on it. We quickly learned that these stripping chemicals were just brutal. Our gloves were insufficient to protect our hands and any chemical that touched our skin caused an emergency dash for the bathroom to rinse it off. We soon realized we’d need to cover our legs and arms completely and upgrade our gloves. We were also, of course, wearing safety glasses.

We banned the kids from the work area and probably made our entire street of townhouse inhabitants shake their heads at the crazy people in the garage. Refinishing old furniture…what the heck is that kind of behavior?

With sweat dripping down our legs and faces, we stripped. And we stripped. And we said  more than once, “What have we gotten ourselves into?” It turns out that if you are a novice stripper (it never gets old!) you should not choose a piece of furniture from the Depression era that is dripping with detailed crevices. As the paint came off, we realized there were even more of these crevices than we could have known. Also, the paint was not our only problem. Underneath it was a very sticky stain job. It was a mess. 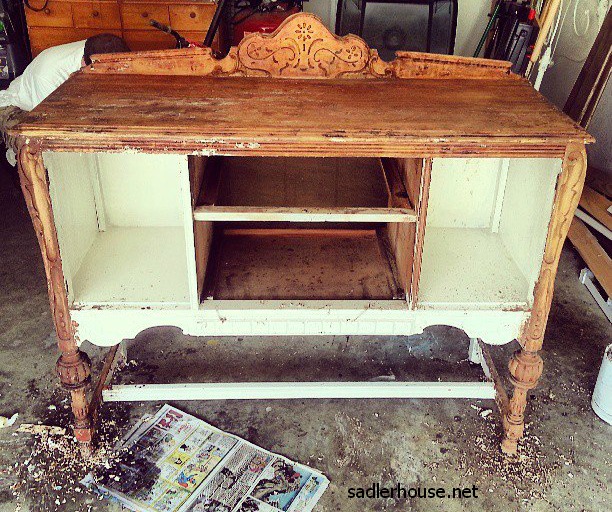 The top was the easy part. Relatively speaking…

Do you see all that debris on the ground? That’s paint. We went through probably eight of those little metal brushes that remove paint from crevices.We used scrapers. We used cloths. We used steel wool.

We used a lot of deodorant…although not on the buffet. Everything was just totally gross.

Some of the best moments were when we started on the drawers, though. What a surprise was hiding from us under the latex! 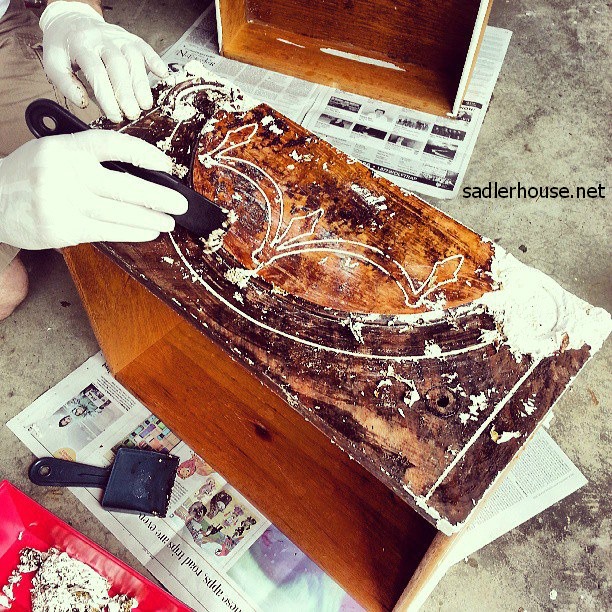 Guess how many toothpicks I used on the details of this drawer?

Look at that beautiful two-toned wood! And who could have expected this gorgeous chevron pattern?! Inspired, I tell you. The end result was exhilarating…you know, for dorks. 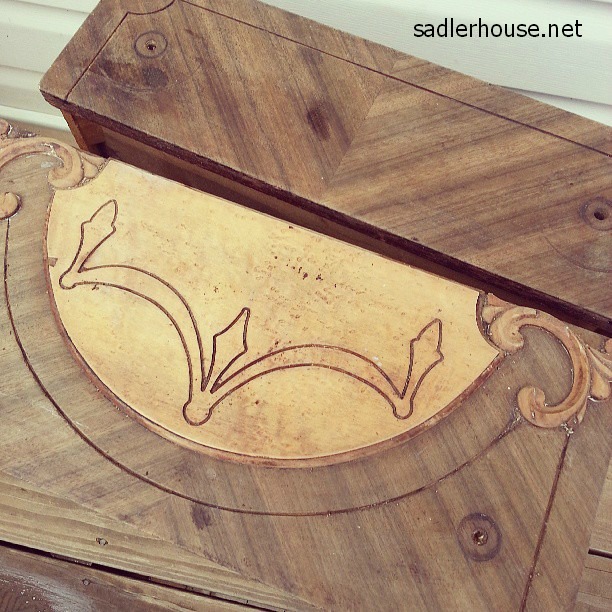 We were very fortunate that the piece still had all its original hardware. We were able to remove the drawer pulls and hinges and soak the paint off pretty easily.

The doors were another source of delight (although they took down a forest’s-worth of toothpicks, as well).

A tale of two doors…

We learned we had to be gentle and not douse the wood with much water while we were cleaning it, because the wood easily became damaged and shed off of the more intricate parts. I spent at least an hour with tweezers on each door, as well, removing stretchy paint from the crevices.

Did I mention our neighbors probably thought we were barking mad?

At a certain point, we had to just accept that this buffet would never be completely rehabilitated from its traumas. There were bits of paint we couldn’t get without damaging the wood. There were places where we just felt the stress of the chemicals wasn’t worth the tiny improvement we’d make by getting that last bit of stain. But, of course, this buffet was not going to live at a perfect house full of mint-condition furniture. It was moving in with crazy old us and would be used in a 110-year-old house.

So, we were done. Dan gently wiped the entire buffet with mineral spirits, which helped quite a bit in evening out the tone and in removing debris. When the piece was completely dry, we brushed it all over with a coat of Bulls Eye Shellac.

Then we thanked the heavens that we were done and said “Next time…perhaps a simpler piece. Like…MISSION STYLE.” 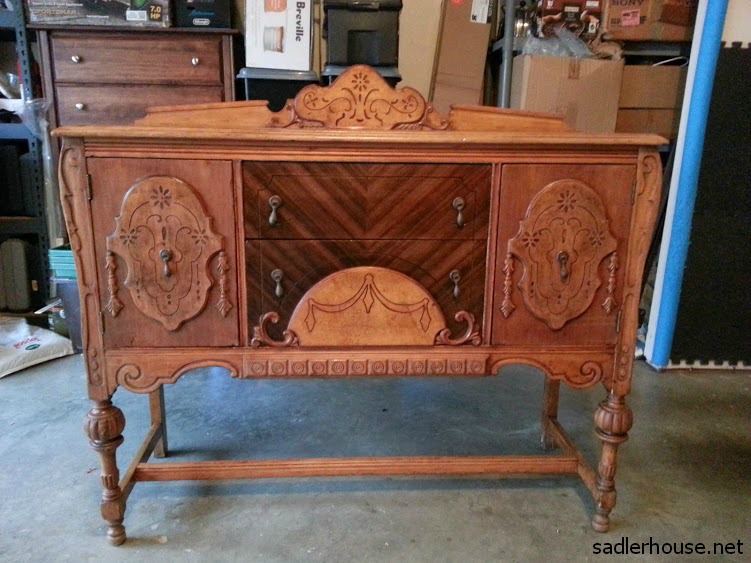 Buffet…I love you so much. 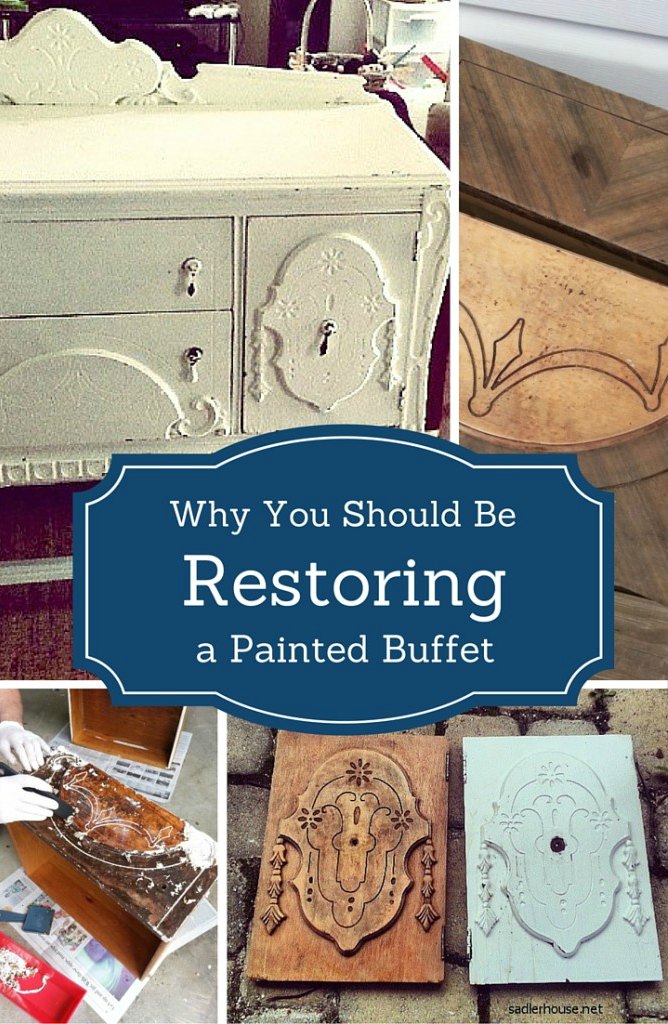 Check out our other crazy DIY projects!

17 people are talking about “Refinishing a Buffet”